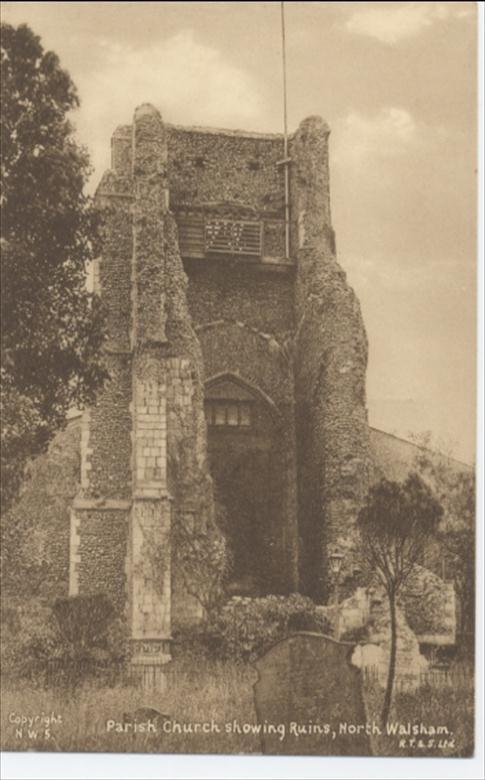 It is probable that the incomplete church only needed repair after the turmoil of the Peasants Revolt, and not complete re-building as local legend states. In fact it was that same Bishop Henry De Spenser who consecrated the building within twenty years of the battle. This is the edifice seen today, the largest Wool Church in Norfolk, built from the profits of the wool and weaving industries. The church is noted for its spacious interior with lofty columns; the lack of chancel arch making it light and airy. Many fascinating artifacts remain in the church of which one is a richly carved and decorated telescopic font cover, dating from the fifteenth century, and hanging from a carved oak beam. Of a similar date are the remains of a wooden screen which separated the clerical chancel from the peoples nave. its mediaeval panels are carved and painted with an array of saints. The south chapel contains an unusual sixteenth century Communion Table; unusual because of the corrected inscription along its front panel made after an alteration of the Prayer Book. Another treasure is the unique Royal Arms Board at the west end of the church, one side with the arms of Cromwells Commonwealth, and the other with the Arms of Charles II. Also to be seen are an Iron Bound Chest, two remaining tip-up seats from the monks mediaeval quire, and a wooden Armoury Chest. (The Churchwardens had prepared for the coming of the Spanish Armada by buying six hundred corselets!)

The parish church is entered from the Market Place through a magnificent pinnacled porch, with rich carving and heraldic shields. The statues are modern, showing Saint Benedict, the patron of the Mother Abbey near Horning; Saint Nicholas, the present day patron of the church; and the Blessed Virgin Mary with the infant Christ in the centre niche, for it was under her dedication that this great church was built.

The once magnificent tower is now reduced to a ruinous mass, which stands sentinel over the town like some rocky crag; its strange shape drawing many people into the town centre to investigate it. It was built to draw people to God, and even in its ruined form, it still does.

From whichever direction you enter the town, the building that dominates more than anything else, is the ruined tower of the church. In the early eighteenth century the town boasted a glorious, soaring tower and spire, the tallest construction locally, being second in height only to Norwich Cathedral. It is known that the parapet reached a height of 147 feet, with a spire later added to compete with the then new church tower at Cromer. This spire may have taken its height to around 180 feet. A heavy ring of six bells was hung in the tower which also housed a chiming clock. These bells caused a dispute in 1616 between the townsfolk and the sexton whose duties caused him to ring the Great Bell ...orderly and full out one halfe hour at the least... every morning at four oclock!

Friday 15th May 1724 saw the towns Ascensiontide Fayre, and the bells were rung for many hours. The ringing of the bells combined with a rather windy day caused a vibration to occur in the tower. This was noticed by the verger when he ascended the tower in the evening to wind the clock. He was so alarmed by the distressed state of the tower that the clock remained unwound as he fled to warn people away.

Between nine and ten oclock the following morning, the doctor of the town was walking through the churchyard, and to his horror, one side of the steeple collapsed before him, his only injury being a cut to his ankle from a flying flint!  In the years that followed, monies were raised to reconstruct the tower, but the weather was to weaken the ruin yet further, and in 1835 more falls indicated the weakness of the upper stonework. February 17th 1836 saw the last major fall when heavy wintry gales brought down the north side of the steeple with a crash that sent earthquake-like tremors through the town. The remaining east wall of the belfry stage was then dismantled as a safety precaution. In 1939 stabilisation work was carried out on the tower, in the hope that one day rebuilding might be possible. Plans have been drawn up to this end, and one version of a new tower (minus a spire), by the eminent architect Sir Charles Nicholson, can be seen inside the north porch of the Parish Church. 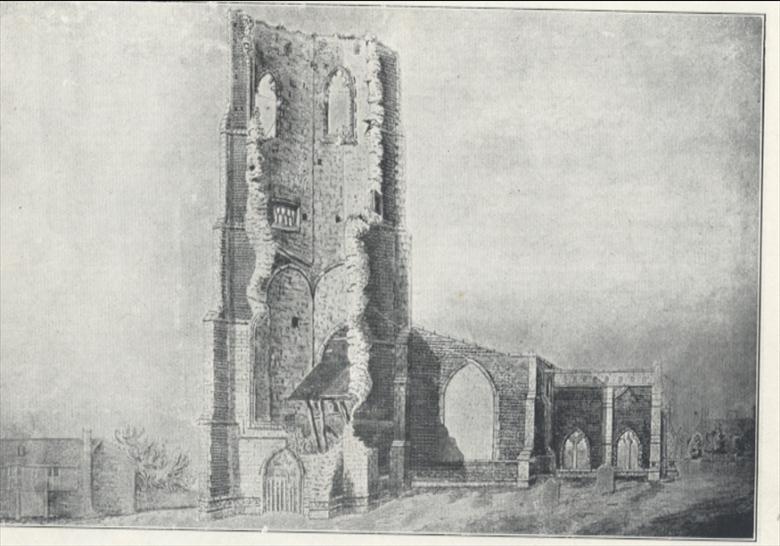